Spaying or Neutering Your Pet Benefits Them AND You!

Based on an article that first appeared at
Northeast Animal Hospital

If you grew up in the '80s or ’90s, then you know the highlight of staying home from school sick was watching “The Price is Right.” For over 30 years, Bob Barker signed off with, “Help control the pet population. Have your pet spayed or neutered.” For those who have grown up in the 2000s, Drew Carey has continued the mantra. But besides the fact that Bob or Drew said so, just why should you spay or neuter your pet?

There are many reasons to spay (female pets) or neuter (male pets, though sometimes this term is used for both genders) your dog or cat; this will benefit you both!

It does help reduce pet overpopulation. Millions of healthy dogs and cats are euthanized in the United States every year simply because there aren’t enough homes for them all. For example, a 2016 census of shelters conducted by the University of Florida found that 115,023 unwanted pets were euthanized.

According to the American Veterinary Medical Association, the capture, impoundment, and eventual destruction of unwanted animals cost taxpayers and private humanitarian agencies over a billion dollars each year.

Numerous studies have found that spaying or neutering increases your pet’s life expectancy by 1 to 5 years. Reasons for this increase include decreased risk of certain cancers, protection from contracting diseases, and less risk of getting hit by a car if they roam in search of a mate. According to Spay USA, “as many as 85% of dogs that are hit by cars are unaltered.” 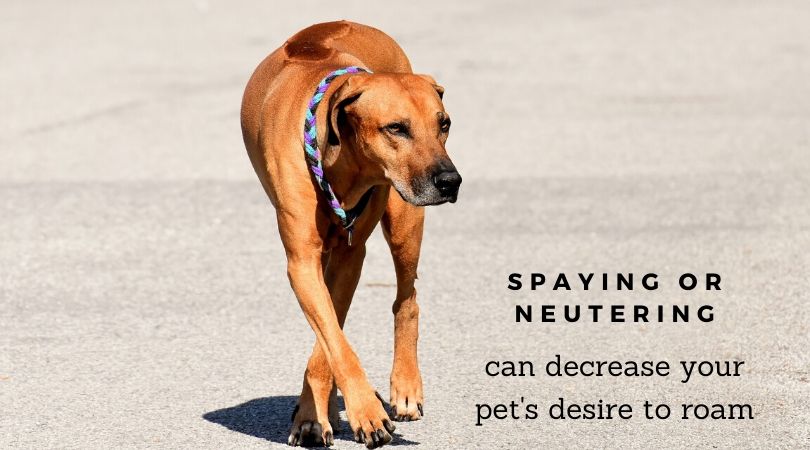 Benefits for Female Dogs and Cats

Your dog will no longer have heat cycles and will have a decreased desire to roam. If you have a puppy that darts out the door any chance she gets, you might find that, after spay surgery, she’ll stop rushing for the door as soon as it’s opened. Obedience training may work best when coupled with spay surgery for these types of behavioral issues.

Your spayed female cat won't go into frequent heat cycles. During breeding season, an unaltered female can go into heat for four to five days every three weeks. To attract males she can yowl and urinate much more often than usual—sometimes spraying the house!

Benefits for Male Dogs and Cats

A neutered pet will be much less likely to roam in search of a female. Research varies on how far away an altered male cat can detect a female in heat, but some say he can smell her from a mile away and track a roaming female for up to nine miles! In dogs, it is said a male can find a female in heat from 3 miles away.

Neutering can help your dog behave better by curbing their aggression levels (which will also reduce their likelihood of fighting other males); by reducing their urge to mount other dogs, people, or anything else he can manage to reach; and by reducing the urge to mark their territory inside the home.

Your altered male cat will be less likely to spray urine around the house, especially when neutered before this behavior is learned.

Testicular cancer is eliminated in neutered pets, and prostate cancer and infections are greatly reduced.

What Spaying and Neutering Won’t Do 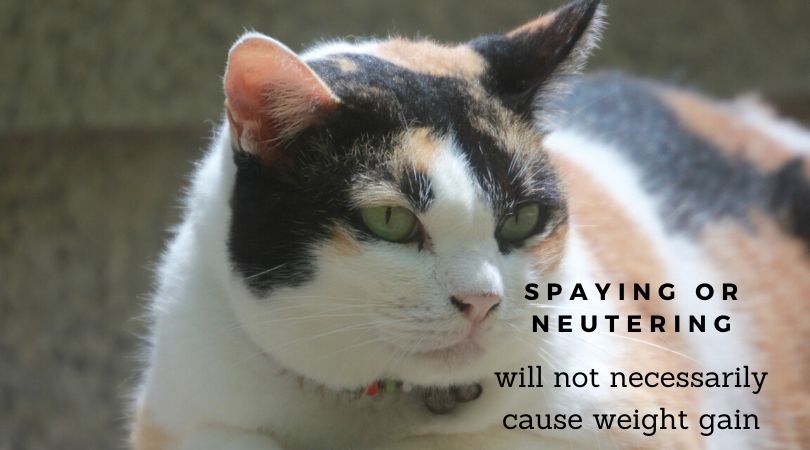 Spaying and neutering will not cause your pet to become overweight. The causes of weight problems are lack of exercise and overfeeding. An altered pet will remain an ideal weight as long as exercise and a healthy, portioned diet are provided.

Spaying or neutering is not a replacement for socializing your pet and providing obedience training. While it can reduce undesirable habits and behaviors, it’s not a quick fix and may not produce the desired effect in pets that have deeply ingrained habits.

Spaying or neutering is one of the best things you can do for you, your pet, and your wallet. Long-term monetary costs for unaltered pets include potential treatment for cancer, treatment for pyometra, caring for a mother and her litter, or addressing other health problems that roaming pets can incur. Gone will be the stress that the behavior of an unaltered pet causes us. Then there’s the inestimable pain that losing a pet far too early costs us. Bob was correct: when it comes to spaying and neutering our pets, the price is right.

If you have any questions about having your pet spayed or neutered, please reach out to us!

Cats
Back to top